Have a seat at our table and join us for BeersGiving!  ​Get TICKETS HERE.


WHAT IS BEERSGIVING?
The pairing of seasoned Veterans with rookies to share knowledge & gain insider tips on how to transition a
career. Beersgiving is developing relationships to facilitate these conversations and help create successfully
diverse and inclusive industries.
​

ABOUT
​BeersGiving is an initiative Co-Curated by Danii Oliver and Eric Jackson.
BeersGiving showcases to the industry another way to enjoy craft beer as a medium to bond with community, friends and family as a support system not a vice. High performing individuals are often stressed out from the grind of working dangerous or high demanding jobs they are otherwise passionate about. Industry professionals don’t always get the luxury of enjoying events they are tasked with working. Veterans don’t always get the luxury of enjoying the holidays with families. Beersgiving is a step back from all the grind of consumerism to give thanks to the families whose sacrifice makes it possible for us all to live the American dream free to craft and manufacture the future while sharing the fruits of our labor.

More often than not wholesalers or consumer sales trends dictate what an owner allows a brewer or chef to produce. This event breaks free from daily expectations and competitor comparison to showcase how impactful once in a lifetime experiences can bring value.”
– Danii Oliver (Navy Daughter & Brewery Owner: Fort Worth, TX)

Danii is the ​owner of Island to Island Brewery:
Danii’s brewery taproom was named the most welcoming taproom in all of New
York after years of grinding it out in the big city proving she could build a business on the pioneering concept of serving
American diversity with a side of family. Danii is now expanding Island to Island into the Friendly state of Texas as an estate
brewery with its own permaculture farm making this farm brewery better able to build on its mission – following the seasons & honoring family tradition – while crafting Indigenous American craft beer
​alongside non-alcoholic fermented beverages.​ 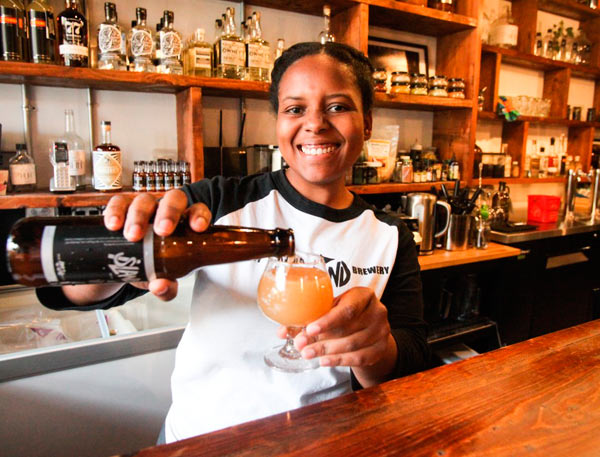